Firstly, nicely done on this product… my workplace bought one of these to investigate the power consumption of some battery-operated devices we’re prototyping, and while I’m still learning how to drive this, I’m learning a lot.

The particular device we’re developing is a wireless microcontroller-based device which participates on a 6LoWPAN network, so communicates to the outside world using UDP and IPv6 – and reports a lot of what it’s doing via syslog protocol, whilst receiving network time synchronisation via multicast NTP and/or unicast SNTP. So, the device knows the time, and time-stamps its logs which are then received and recorded by rsyslog.

I can look through the logs and see the trail of events that the device was up to. I’m able to measure and record the power consumption, but there’s a snag: 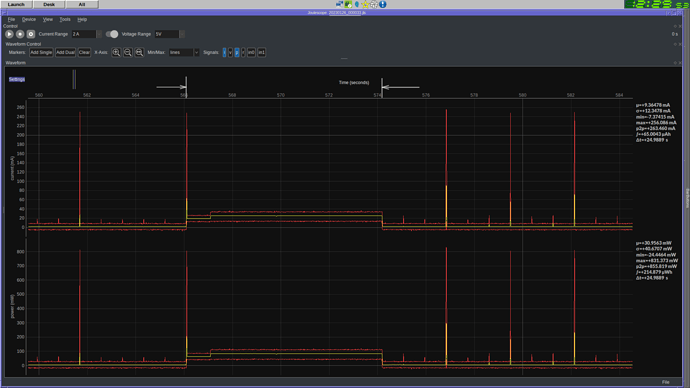 Looking at the above, while I can see the time relative to when I clicked the record button (which looks to be around 00:00:33 – I think that’s in UTC, my workstation runs Australia/Brisbane aka UTC+10).

If I try to figure out when this event happened to correlate it with the logs, I think I can get a rough approximation by summing 00:00:33 with the relative time-stamp, but I was wondering if there was a way in the UI to get the absolute time-stamp of a given event? i.e. is there a feature that would tell me exactly when 566 and 574 seconds was?

Sounds like you are starting to really dig into things! Unfortunately, the existing Joulescope UI 0.10.x does not have a way to display wall-clock time. The timing is in samples, which are only relative to sample 0.

We are working on the next major release of the Joulescope UI. We should have an alpha in about two weeks. This next major release will use UTC time internally, rather than samples, which will make this feature possible. I do not think that we will have time to add support to the waveform view for the alpha, but this feature is definitely on the list!

With JLS v2 and the upcoming major UI release, we now finally have all the pieces in place to make this happen.

I apologize for not having anything to help you today, but we will get there soon. We will post here when the alpha is available so you can try it out.