How is power and energy calculated in Joulescope?

In Datasheet it states that Power and Energy are calculated in Joulescope. Is my assumption correct that it is calculated just using the following formulas:
P = UI
E = P *t

I think so, but I want to be sure that I understand your abbreviated E term. So, given current I and voltage V, then power P and energy E are:

The Joulescope software performs Euler integration, which is the summation term shown. Note that the computation of E has lots of potential numerical issues. We use float64 over several levels of reductions (time windows) to compute the energy in each 1/2 second interval. When then accumulate using an infinite precision Python integer with units of pJ. This design choice guarantees accuracy and range to support captures that last for years.

Thank you very much for your reply. Am I assumuning correctly that the inbuilt ammeter and voltmeter measure the analog value of current and voltage respectively then it is converted in in digital values using adc converter? Also i am trying to convince our marketing department to buy more joulescopes but i need to explain the exact working of the device before I get an OK from them. The datasheet although helpful, does not go into much details behind the theory of operation. Is there a reference document, where the theory of operation is discussed in more detail?

Let’s see if I can expand. I’ll start with the figure from the “Theory of Operation” section of the Joulescope User’s Guide: 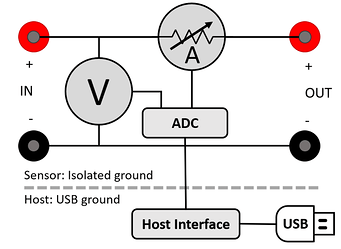 The Joulescope instrument transfers the raw ADC values to the host computer. The host computer applies the calibration to compute current in amps and voltage in volts. It also applies the range transition filter, performs downsampling when requested, and buffers the samples for the UI and recording.

Does this answer your questions? What needs further elaboration?