We received a report from a customer with a new Joulescope JS110. When they connected the JS110 to the host Windows 11 computer, the status LED next to the USB host connector illuminated green. The Joulescope device appeared in Device Manager. However, the Joulescope UI did not list the device. What we found is very strange. Hopefully, this post helps in case someone else encounters this issue!

Upon investigation, another driver was claiming the Joulescope: 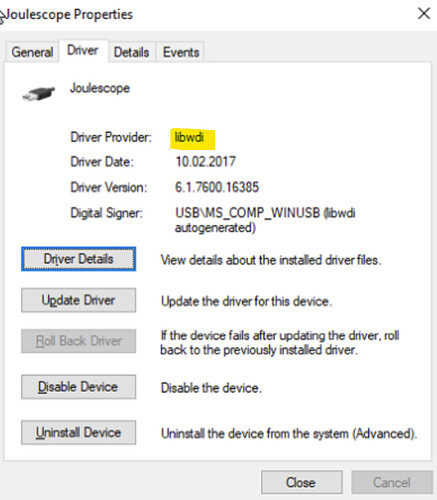 The libwdi driver is so broad that it claims all WinUSB devices, which is very unfriendly. Here is the INF template. Unfortunately, it overrides the DeviceInterfaceGUID, which is how the Joulescope host software discovers Joulescope devices on Windows. Normally, the Windows-specific USB descriptors populate DeviceInterfaceGUID and several other registry entries.

Manually selecting Update Driver and selecting the correct, default WinUsb driver did not fix the problem: 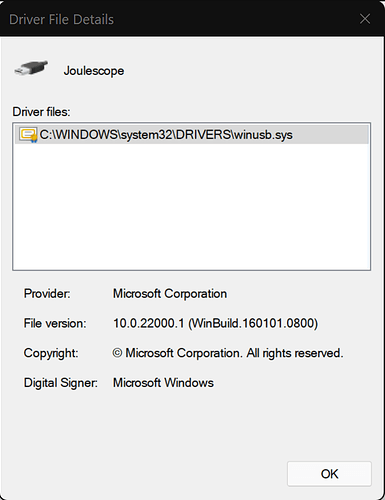 However, Uninstall device, unplugging, and replugging seems to have fixed the issue, even though the libwdi driver still claimed the Joulescope.

The Joulescope provides information to the host computer when it connects using Windows-specific descriptors. You can manually verify the registry entries using regedit.

The most important key is the “DeviceInterfaceGUID” in “Device Properties”:

Here are some related posts:

Software not connecting to hardware Issues

And if you are still running Windows 7:

Hi @Philip, Thanks for backing Joulescope and welcome to the forum! Depending upon which updates and software your Windows 7 system has applied, it may or may not support automatic WCID Device driver installation. Your report of trying multiple times only to have it work later is odd. On failures, was Joulescope showing up in device manager under “Other devices” with the yellow exclamation point (I assume that this is what you mean by “anonymous USB device”)? I put together an INF that forc…

I filed issue #251 with libwdi, and I received a quick & thorough reply. The net is that I do not know how the computer arrived at this situation, only that it did. The libwdi project does work to respect USB VID/PID so this situation does not happen. Hopefully, this is a one-time occurrence!